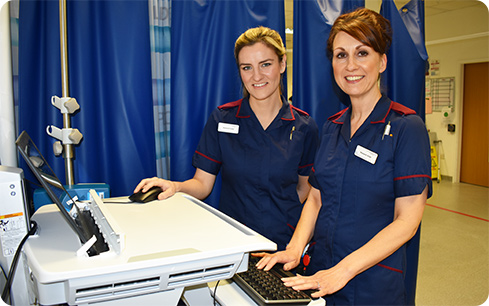 UHB holds the coveted status of Hyper-Acute Stroke Research Centre (HSRC), which means it can boast both the facilities and highly skilled staff needed to conduct research into strokes. Only ten UK hospital trusts hold the HSRC status which is reviewed on a six monthly basis and requires the hitting of strict targets. The fact that UHB holds the status is testament to the skill of the stroke team. 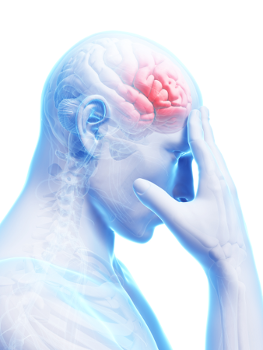 Michelle, who trained and has worked all her professional life in Birmingham and Katherine, who hails from Iowa, USA are excited about the trials and research they are involved with and the challenges the new posts bring with them.

Michelle, previously a ward sister on the stroke unit at UHB for 15 years, has been involved with trials before but has not lead on the research as she is now able to do. “After being a Ward Sister for a long time I wanted to do something different and while I’m still working in the same area, this a very different post,” she said.

Michelle explained that there are currently five different actively recruiting trials on stroke running at the Trust, with three currently in follow up.

She said: “The first trial called PRACTISE (Penumbra and Recanalisation Acute Computed Tomography in Ischaemic Stroke Evaluation) is an NIHR (National Institute for Health Research) funded trial to evaluate the use of different forms of imaging scans in acute ischaemic stroke patients, compared to standard clinical imaging of a CT. We want to find out if additional scanning affects treatment decisions.”

Michelle and Katherine get a call when a suitable stroke patient is admitted to A&E. If timing and conditions are right, the nurses will meet with the patients and their carers to discuss involvement in a trial and if the patient agrees to be recruited, then they will take over their care and treatment. Currently 53 patients have been recruited to the PRACTISE trial, 48 of whom have been signed up at UHB.

Katherine outlined another trial the team are involved with. She said: “ATTEST 2 (Alteplase-Tenecteplase Trial Evaluation for Stroke Thrombolysis) is a large scale study that aims to recruit 1,850 patients across approximately sixty UK stroke centres. It will investigate how treatment with alteplase, which is the standard care, compares to treatment with tenecteplase, a clot busting drug usually used in heart attacks.” The ATTEST 2 research is being funded by the Stroke Association and the British Heart Foundation.

Katherine’s path to working in research at the Trust is a more unusual one. Born and raised in the USA, Katherine trained as a nurse in the States and was working at Piedmont Atlanta Hospital when she met her French fiancé.  Taking the plunge to come and work for the NHS when job opportunities opened up for them both in London two years ago, Katherine was initiated into the NHS working in neurosurgery at Kings College Hospital.

Another job move brought the couple to Birmingham, where Katherine was delighted to take on her new role at UHB. “There is a great team here and it’s fantastic to get the opportunity to get involved in such important research,” she said.

Other research Katherine and Michelle are also involved with is the HIPPS–CI, looking at the hippocampus and the impact stroke has on this brain area, for which they currently have 36 recruits and are collaborating with University of Birmingham research fellow, Rosanna Laverick.

The newest research trial the team are doing is called PLORAS (Predicting Language Outcome and Recovery After Stroke) and is a project looking at recovery of language after stroke, hopefully giving future stroke survivors a prediction about their recovery. The team are working with University College London on PLORAS trial.

Katherine and Michelle are both proud to be part of the ever growing research team based at UHB and their input no doubt enhances the growing reputation of the Trust as a place of world leading research and innovation.