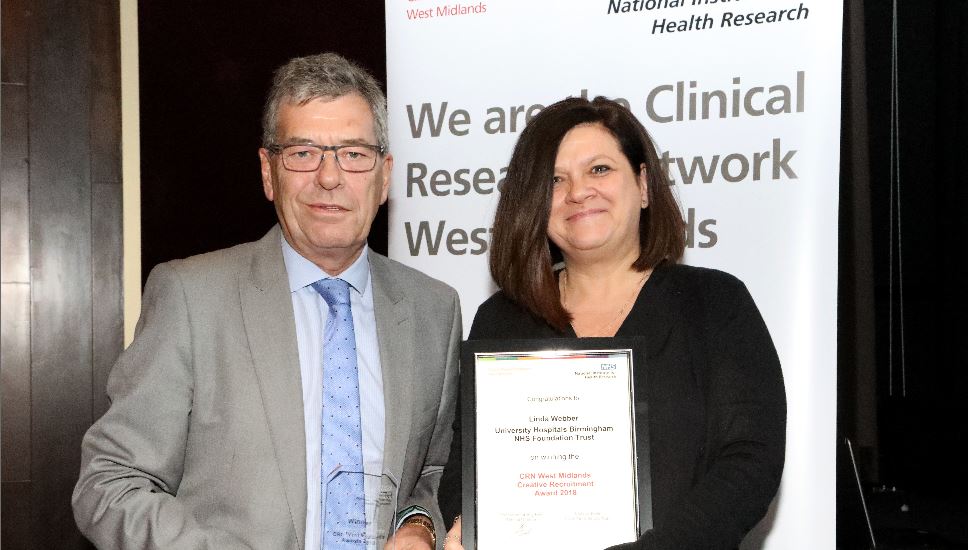 The other UHB nominations, which included the Paediatric Research and Cystic Fibrosis Research teams at Heartlands Hospital and the Peri-Operative Research team at the Queen Elizabeth Hospital Birmingham (QEHB), were also highly commended in their categories

Thomas received the ‘Investigator of the Year’ award and Linda was presented with the ‘Creative Recruitment’ award.

The awards ceremony, held at the Everyman Cinema on 4 October, saw trophies presented in 13 categories including Collaboration in Research, Team of the Year and Emerging New Team.

Hilary Fanning, UHB Director of Research Development and Innovation, said: “On behalf of BHP and the UHB RD&I team, I’m delighted for Thomas and Linda. It is great to see their commitment and leadership recognised by these awards.

“The two awards and three commendations are a testament to the quality and quantity of research taking place across the Trust.”

Thomas, based at QEHB, has been awarded several research grants in the last year, and was the Chief Investigator for three recently completed trials. He is also the Clinical Director of the Birmingham Surgical Trials Consortium (BiSTC), a board member of the Clinical Trials and Evaluations board of the NIHR Healthcare Technology Assessment team, and is currently involved in seven NIHR portfolio trials.

Thanks to Thomas’ work, the General Surgery team has also expanded to include surgeons, trainee surgeons, a trials manager, four research nurses, a trial administrator, and a Project Manager.

Dr Saloni Mittal, NIHR General Surgery Project Manager, said: “Thomas is involved in lots of projects and trials, and has been central to the development of the investigators of the future through the West Midlands Research Collaborative (WMRC), of which he was a founder member.

“Winning the Investigator of the Year award is a fitting recognition of Thomas’ work.”

Linda, based at Heartlands Hospital, has developed the research nurse workforce across the Trust’s Heartlands, Good Hope and Solihull hospital sites from 12 to 50, taking up her current post as Lead Research Nurse 14 years ago, when the Medical Innovation Development Research Unit (MIDRU) opened. Linda has supported dozens of staff with their development as researchers, including midwives, research nurses, allied health professionals and doctors.

She has introduced novel ways of encouraging research teams to meet their recruitment targets, including a team sunflower growing competition. Linda has also encouraged a culture of collaborative working across all three hospital sites, ensuring that patients have the best research experience.

Sarah Pountain, Interim Head of Research at Heartlands, said: “Throughout her career Linda has always gone the extra mile for both patients and staff, and is always happy to answer any questions or queries.

“Linda supports research teams in recruitment and is constantly coming up with innovative ways to ensure patients are given the opportunity to participate in research.”

The Cystic Fibrosis Research team, led by Dr Edward Nash at Heartlands, were commended for the Patient and Public Involvement and Engagement Award, thanks to their work organising a PPI session for patients using videoconferencing technology.

The Paediatric Research team at Heartlands, nominated in the Team of the Year category, were also commended, having grown to a team of seven, covering a range of paediatric research including HIV, infectious diseases and Duchenne Muscular Dystrophy (DMB).

The Peri-operative Medicine Research group at QEHB received a commendation thanks to their efforts as an Emerging New team. Set up in the summer of 2017, the group has delivered several studies, which have the potential to significantly improve care for patients undergoing surgery.