A LifeArc Philanthropic Fund project grant of more than £420k has been received by Dr Sovan Sarkar for a three-year translational research project in rare diseases.

LifeArc is a British life science medical research charity and was formerly known as the Medical Research Council (MRC) Technology. 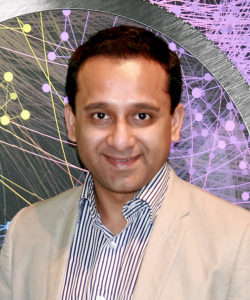 The grant of £420,826 has been awarded to Dr Sovan Sarkar (pictured left) who will be principal investigator along with co-investigators Professor Timothy Barrett, Dr Malgorzata Zatyka and Dr Richard Tuxworth from the Institute of Cancer and Genomic Sciences, together with colleagues from the Birmingham Children’s Hospital; Dr Suresh Vijay and Dr Evangeline Wassmer. The research area of the cross-BHP scientific team involves autophagy, stem cells, neurodegeneration and rare diseases. The project will be on ‘Targeting autophagy as a shared mechanism in rare early-onset neurodegenerative diseases’.

The aim of the project is to identify existing drugs that can be repurposed to treat rare, childhood-onset neurodegenerative disorders called Wolfram syndrome and Niemann-Pick type C1 disease, which are devastating diseases for which there are currently no effective therapies. Each disorder is individually rare, which makes developing new treatments and trialling them in patients extremely difficult and expensive.

The research will use brain cells called neurons generated from induced pluripotent stem cells derived from the patients to test drugs capable of stimulating autophagy and suppressing the disease features in these clinically-relevant patient cells.

Autophagy is a critical biological process essential for neuronal survival and human health that becomes defective in myriad human diseases including certain neurodegenerative diseases and cancer. This process becomes dysfunctional in the two rare diseases under investigation that could contribute to neuronal cell death in the brain.

The goal is to target autophagy as a shared disease mechanism in order to identify autophagy-inducing drugs already in use for other conditions that are capable of suppressing the disease characteristics in patient-derived neuronal cells. These drugs would then be excellent candidates to re-licence for testing in patients with Niemann-Pick disease, Wolfram syndrome, and other rare inherited neurodegenerative diseases such as Batten disease, where autophagy induction could be a possible treatment strategy.

Dr Sarkar said: “Autophagy is a biological process through which the cells maintain their homeostasis, and therefore important for their survival that contributes to human health. Defective autophagy can lead to a diverse range of diseases from cancer to neurodegeneration. Through this translational LifeArc grant, we hope to identify candidate drugs for certain rare childhood neurodegenerative disorders. We and others have found that autophagy is defective in a range of these rare diseases. We will exploit this common disease mechanism to find autophagy-inducing drugs in neuronal cells utilising our recently-established human pluripotent stem cell platforms.”

“There are many rare diseases of early childhood that cause developmental delay, seizures, and early death. Some of these are caused by a shared mechanism called impaired autophagy. With this grant we plan to find ways to restore autophagy function and new treatments that will benefit children across several of these rare diseases,” Professor Barrett added.