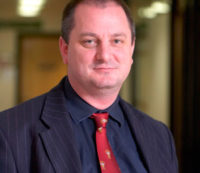 David qualified from University College of Medicine, Cardiff in 1987 and worked in general medicine and anaesthesia in South Wales before moving to London in 1993 as a research fellow in critical care. He subsequently added the post of Lecturer in Clinical Pharmacology at UCLH to his resumé, prior to his appointment to a Consultant post in Critical Care at University Hospitals Birmingham in 1996.

David was seconded two days per week to the NHS' National Programme for IT in 2004 and appointed as Senior Responsible Owner for e-prescribing in November 2005-April 2007.

In December 2006, David was appointed as Executive Medical Director of UHB, with responsibilities including Executive Lead for IT. He has led the in-house development and implementation of advanced decision support systems into clinical practice across the organisation.

David was appointed as Chief Executive of UHB on 1 September 2018.