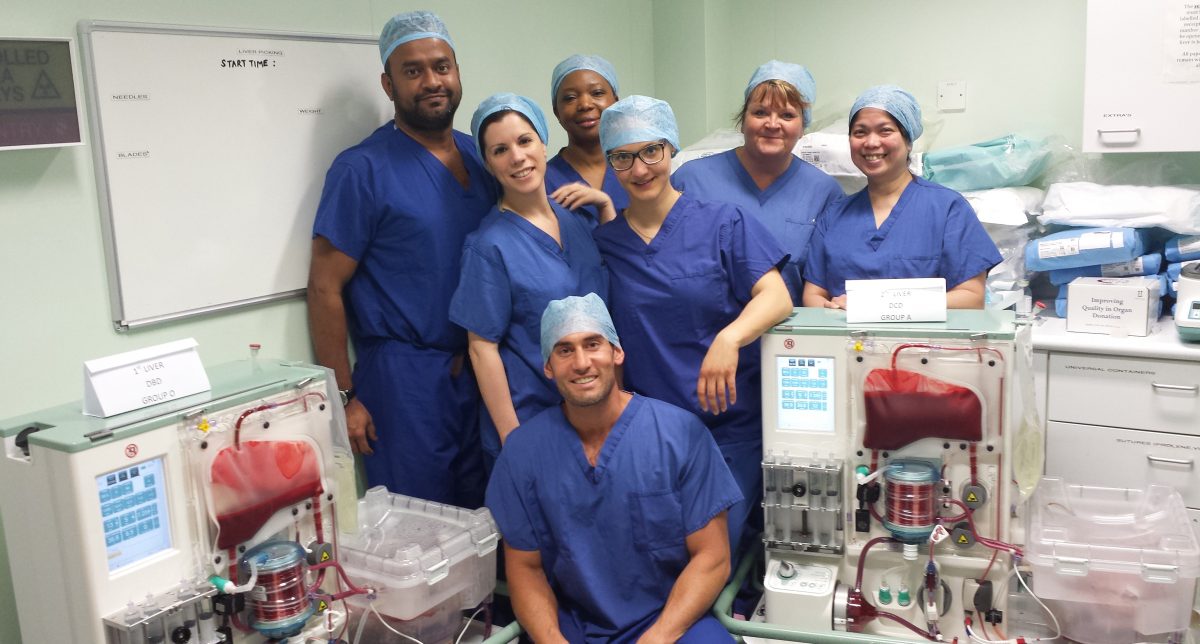 Many people marvelled at the liver transplant story in the recent BBC TV hit series ‘Surgeons: At the Edge of Life’ – all filmed at University Hospitals Birmingham (UHB) NHS Foundation Trust.  One of the stars of the story was a liver perfusion machine, which preserves and even ‘perks up’ organs which may have previously been deemed unsuitable for transplant.

This very machine was used for the ground breaking COPE (Consortium for Organ Preservation in Europe) trial, in which researchers at UHB played an essential part by enrolling half of all of all the 220 transplant patients involved.

Measuring biomarkers of liver damage, they found a 50% reduction in graft injury in normothermic preservation compared with cold storage, despite a 54% increase in the mean duration over which livers were preserved and a 50% lower rate of organ discard. In addition, in the year after transplant, the authors found no significant differences in rates of bile duct complication, or graft and patient survival rates (as predicted by a clinically accepted biomarker), between preservation approaches.

Research into the use of the machine is ongoing, and Hynek Mergental, a Consultant Surgeon at the Liver Unit at UHB and Honorary Senior Lecturer at the University of Birmingham, led the Birmingham team. Mr Mergental explained: “Making the most of the livers available is a priority for those working in the area of transplantation. This innovative, randomised trial has confirmed the benefits of the novel, dynamic organ preservation technology.”

One patient who had her life turned around after receiving a ‘perfused liver’ is mum of three, Susan Bennett from Stafford.

Susan, 44, who was suffering from an auto-immune liver disease, was put on the transplant list in 2014 and agreed to take part in the trial. When her transplant took place in 2015 she knew she had received a liver which had undergone the perfusion process.

During her recovery, Susan vowed to take part in the Transplant Games and bring back a medal in honour of her donor, and she did, wining Gold in the 800mtr track event in Malaga last year.

Susan, who is now in regular contact with her donor’s family said: “My life is unrecognisable now to how it was before my transplant. I am training for the European Transplant Games, am back at work and have never felt so well.”

During the trial, Mr Mergental would travel with the perfusion machine to collect donor livers and bring them safely back to Birmingham, the furthest trip being from Truro in Cornwall. He explained: “The trial has shown that livers transported in a perfusion machine were in a significantly better condition for transplant than those held on ice, making them more likely to produce good long-term results for the recipient. The other benefit of the machine perfusion was the possibility to keep the livers up to 24 hours outside the human body, extending the times by 2-3 folds compared to the ice-box storage. This would make the logistics of a transplant much easier, allowing surgical teams to be prepared and ready and ultimately make the whole process safer for the recipient patient. The longer preservation times and greater organ raise the real prospect of addressing the challenge of growing transplant waiting lists.”

Mr Mergental was keen to emphasise the input, expertise and trial success were greatly helped by the support of all in the UHB Liver Unit. He said: “This was fantastic teamwork and we all should be proud of playing a pivotal role in this innovative clinical trial. There are too many colleagues to mention, but I would like in particular to give recognition to my colleagues Thamara Perera, Darius Mirza and Jo Grayer and I’m pleased to say our work with the Oxford team who developed the perfusion device is ongoing.”