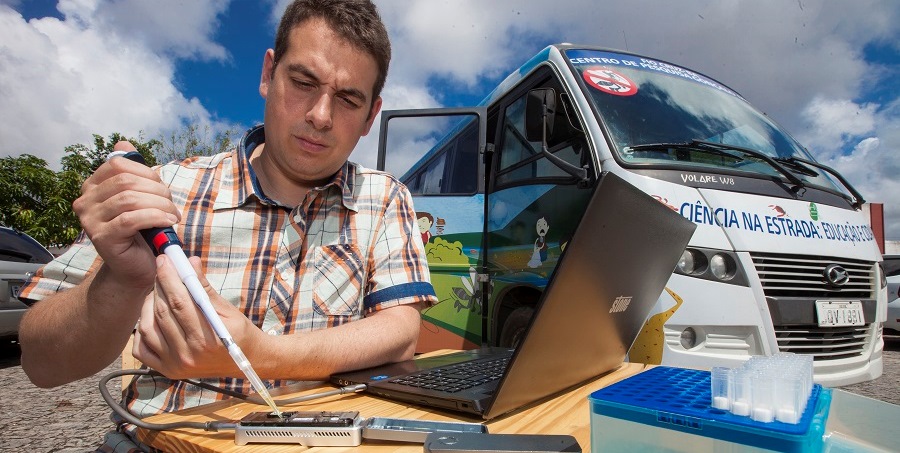 Conventional genome sequencing technologies are difficult to deploy in developing countries, particularly where continuous power is not always available and when access to cold chains, lab space and trained personnel is often limited. In addition, some genome sequencer instruments, such as those using optical readings (e.g. the Illumina platform), require precise microscope alignment and repeated calibration by trained engineers.

These same inequalities also make less affluent countries more vulnerable to infectious disease outbreaks with fewer health workers on the ground to respond to epidemics, as well as fewer clinics and restricted access to medicine.

Birmingham has a strong track record of expertise in the use of cutting-edge genomics and metagenomics approaches to the diagnosis, treatment and surveillance of infectious disease. Recent work has included the development of novel sequencing and bioinformatics methods to aid the interpretation of genome and metagenome scale data generated in clinical and public health microbiology.

Following the outbreak of the Ebola crisis in West Africa, Professor Nick Loman of BHP founder member the University of Birmingham set out to create a ‘mobile lab’ built around existing technology to transport to Africa. While the market-leading MinION technology had previously been used in investigations of a bacterial outbreak, Nick’s lab set out to use it in the context of a viral outbreak for the first time. The team designed a laboratory protocol to permit EBOV genome sequencing on the MinION in order to isolate sufficient DNA for sequencing, and demonstrated proof of principle in pilot experiments at the Defence Science and Technology Laboratory (DSTL) Porton Down, before designing a portable genome surveillance system ready to ship to West Africa.

Here, academic and inter-sector networks played a key role in ensuring the reach and impact of the technology. After deployment of the genome surveillance system, they worked in partnership with diagnostic laboratories in Guinea to provide real-time sequencing results to National Coordination in Guinea and the World Health Organisation (WHO).

This work, published in Nature and repeated later during the Zika outbreak in Brazil, conclusively demonstrated for the first time that real-time genomic surveillance is possible in resource-limited settings and can be established rapidly to monitor outbreaks.

After collaborating laboratories provided leftover diagnostic RNA extracts for sequencing, the workflow – including amplification, sequence library preparation and sequencing – could be accomplished within just one working day. In one case, including remote bioinformatics analysis, the fastest time from patient sample to result was achieved in less than 24 hours, although the protocol was usually performed over two days. In half of cases, the team were able to generate sufficient reads on the MinION (between around 5,000 and 10,000) in less than an hour.

Further work has seen the Loman Lab and Oxford Nanopore improve and validate the real-world utility of their new technology, which should help improve the efficiency of resource allocation and the timeliness of epidemiological investigations. It may also enable the identification of previously unknown chains of transmission through genomically-informed investigations.

“Until even just a year ago, it would have been impractically difficult to sequence a whole human genome, but thanks to recent advances and innovations such as nanopore technology we now have the ability to sequence very long fragments of the genome.”