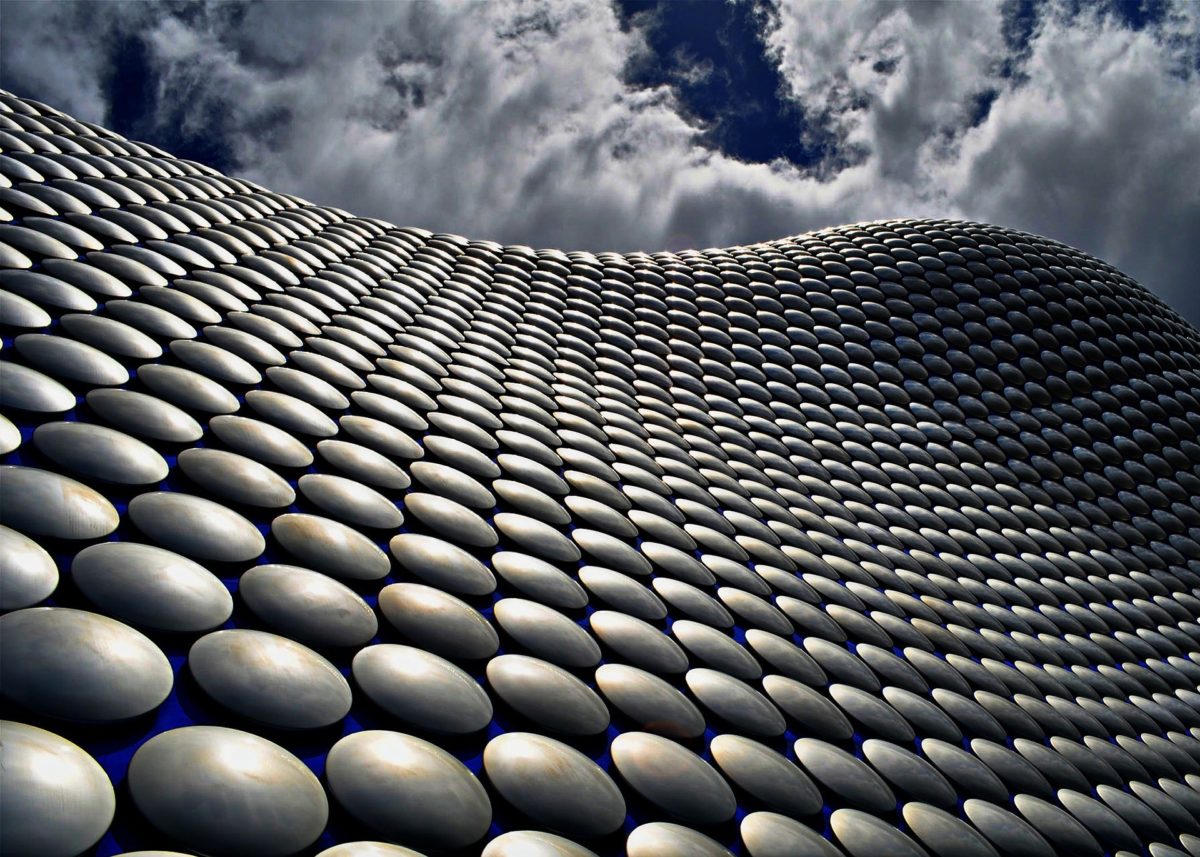 "What we want to do this evening is raise the profile of the issue of air quality in the UK; it is the single largest environmental risk to health and we know it affects people all the way through their lives."

Poor air quality is one of the major public health challenges in Birmingham. We know that the negative impacts of poor air quality are worse for the poorest, most vulnerable residents and those with long-term health conditions.

And so, on Wednesday 20th November, well over 100 people gathered at the Queen Elizabeth Hospital – all showing a real commitment to work together for air quality in Birmingham and the surrounding area – for our inaugural Clean Air for All event.

The evening’s MC Lawrence Tallon, Director of Strategy, Planning and Performance first introduced Dr Margaret O’Hara (both of UHB) who led a packed lecture theatre through an interactive voting session aimed at gauging demographics as well as our existing opinions and knowledge of air quality issues. She explained that some of the questions would be repeated at the closing of the event, to see whether the presentations had altered our thinking on emissions and pollution, and allow a report to be written soon afterwards. (Ed’s note – this report is unlikely to include the result of the test question, “who do you want to win Strictly” – #TeamKelvin)

"We are looking to apply existing environmental expertise to deliver impact in terms of policy, society, health and economic terms for the region's air quality and the health of our population."

William Bloss - Professor of Atmospheric Science, the University of Birmingham

Margaret was followed by Bill Bloss, Professor of Atmospheric Science, who began by leading us through the history of air quality in Birmingham and the UK. Rolling back to the 13th Century, he explained that air pollution has been a recognised issue for almost 1,000 years – during the reign of Edward I, the use of open furnaces was banned, with penalties progressing from a fine for a first offence, demolition of your furnace for a repeat, and ultimately a death sentence for a third violation. As Bill put it – “three strikes and you are very much out!”

Bill explained that on the whole, emissions of all sorts of pollutants have been steadily decreasing over the past 50 years – with the exception of ammonia, which has gradually increased over the last decade. However, the levels of pollutants in our air still exceed WHO guideline levels – and indeed, so do current UK Air Quality Objectives. Initiatives such as proposed Clean Air Zones and the rise of electric vehicles are a start in terms of reducing pollutants, however Bill cautioned that even electric vehicles do still produce emissions when in motion – from their tyres and while braking – and that indoor air quality can also affect our lung health. 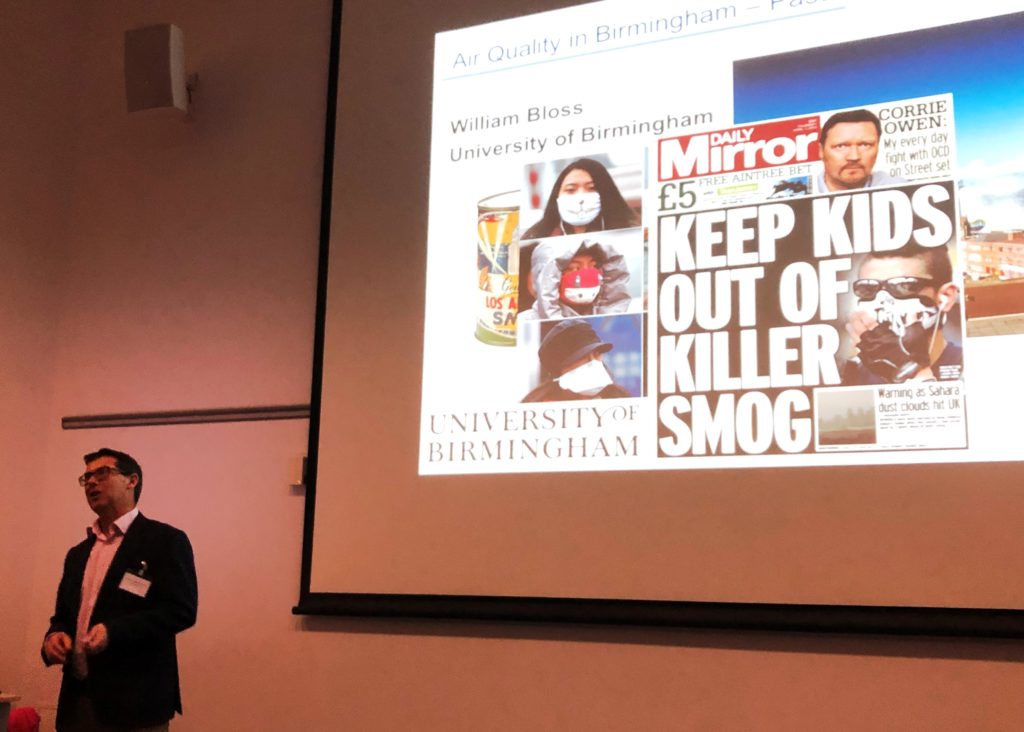 Following Bill was event organiser Dr Suzanne Bartington, whose interest in air quality began when she was a medical student on placement overseas, herself suffering from the effects of air pollutants. Suzanne explained that, worryingly, these pollutants have been found in the placenta – meaning that even before birth, we are feeling the effects of poor air quality. 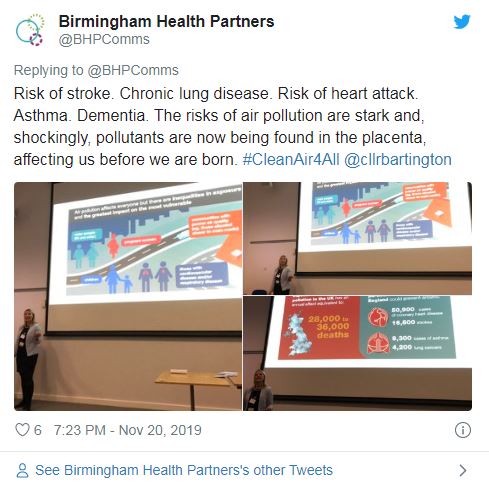 The government estimates that 28,000 to 36,000 deaths can be attributed to long term exposure to human-made air pollution, however there is some good news. Even by reducing fine particulate air pollution by a small amount in the coming years, we can prevent a large number of cases of coronary heart disease; asthma; stroke; and lung cancer.

Next to present was UHB’s Phillippa Hentsch, who did not shy away from the fact that the Trust is responsible for a significant amount of local air pollution through the travel, equipment and drugs that are vital for its everyday operating.

We have a responsibility not to just treat ill health, but to prevent illness in the first place. As an employer of 22,000 people, we know we are a significant contributor and we're thinking seriously about how to do things differently.

Our external speaker for the evening was Sandra Green, a Campaign Network Coordinator from charity the British Lung Foundation, whose aim is that ‘one day everyone will breathe clean air with healthy lungs’. She shared with us some startling facts about air quality and lung health in the Midlands:

We need to protect the vulnerable - children, the elderly and those with lung conditions - and establishing clean air zones is the quickest way to do this. But fundamentally we need to reduce the amount of traffic and encourage active travel.

A last minute addition to the evening’s programme saw Bridget Malins, a former UHB employee, share her experiences of COPD. Acknowledging that her illness was caused by heavy smoking, Bridget still suffers due to air pollution – especially idling vehicles stuck in the Kings Heath traffic near her home – even though she has long quit smoking. Bridget spoke movingly about being able to smell and taste pollutants as she goes about her everyday life, and now has had to stop going out at high-traffic times of day to avoid being left breathless. A sobering reminder that the people affected aren’t just statistics on a powerpoint slide, but real people suffering daily challenges.

The event closed with a lively panel discussion with two key takeaway messages. Firstly, a passionate assertion from Sandra that the one thing we should all be doing to help is driving less – if not stopping driving altogether. And secondly an acceptance that many in the room are already engaged in debate about air quality and taking steps to lessen their own impact – perhaps a case of preaching to the choir. We know we need to reach people who are unconcerned about human pollution or who’ve never thought much about it before.

Our fantastic event organisers have compiled a report on the evening’s discussions with recommendations for us all to consider. Download the Clean Air for All – Event Report.

UHB will continue to promote car sharing and active transport, as well as maintaining green spaces around our buildings and investigating electric fleet vehicles. Through Bill’s WM-Air initiative, the University will provide improved understanding of pollution sources and levels in the region, and new capability to predict air quality, health and economic impacts of potential policy measures. 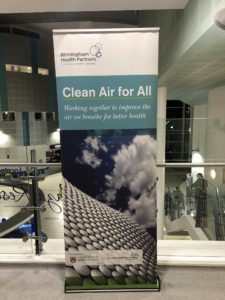