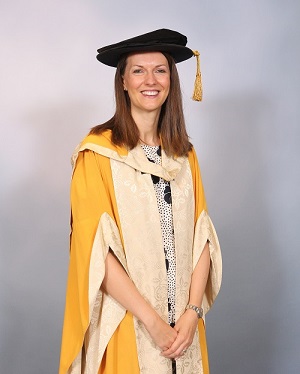 The Chief Executive who created the first NHS Trust of its kind has received a top university honour in recognition of her contribution to healthcare.

Renowned for an innovative approach to NHS services, and putting patients and staff at the heart of all she does, Sarah-Jane created the integrated Women’s and Children’s Trust, when she merged Birmingham Women’s with Birmingham Children’s Hospital in 2017.

Having joined the NHS via the Graduate Management Scheme, Sarah-Jane first worked for the Department of Health, before holding a number of roles at Walsall Hospitals NHS Trust, becoming Director of Planning and Productivity in 2005.

From there, she became Britain’s youngest hospital boss when she was appointed Chief Executive of Birmingham Children’s Hospital and has led the organisation for over nine years, during which it was named Provider Trust of the Year by the Health Service Journal. In 2016, under Sarah-Jane’s leadership, the Children’s also became the first standalone specialist paediatric hospital in the UK to receive an ‘Outstanding’ rating by the Care Quality Commission (CQC).

“I feel so honoured to have been recognised by Birmingham City University in this way and to share such a special moment with hundreds of nurses and midwives set to join the NHS in its 70thbirthday year. Being the Chief Executive of Birmingham Women’s and Children’s NHS Foundation Trust is the best job in the world and that’s all down to the 6,000 amazing staff I have the privilege of leading.

“Their ambition, bravery and compassion is the reason for our success and this recognition belongs to each and every team member working together to provide the very best care to the thousands of women, children and families we look after each year.”

Sarah-Jane is also the Chair of the NHS England Maternity Transformation Programme Board, which aims to make maternity care across England safer and give women greater control and choice. She is also proud to be part of the West Midland’s Leadership Commission, championing the role of women and those from BAME backgrounds.

Sarah-Jane received the accolade during a ceremony held at Birmingham’s Symphony Hall, alongside students graduating from the University’s School of Nursing and Midwifery.