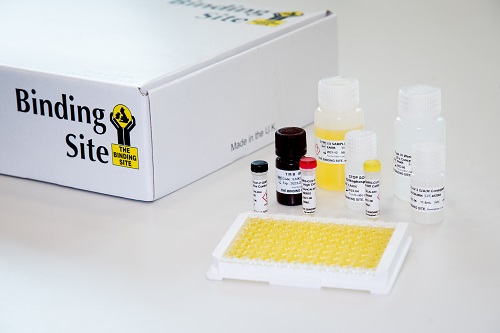 A new test to detect COVID-19 antibodies in people with recent exposure, who are asymptomatic, or have mild symptoms has been launched by The Binding Site in collaboration with the Clinical Immunology Service at BHP founder-member the University of Birmingham.

The unique SARS-CoV-2 Antibody ELISA has been developed to identify individuals who have had a mild, non-hospitalised disease course following SARS-CoV-2 exposure. This latest development has brought together the Binding Site’s extensive experience in developing highly precise, accurate blood tests with the expertise of leading BHP immunology and immunity experts.

The new test specifically detects antibodies (IgG, IgA and IgM) to the SARS-CoV-2 trimeric spike protein, which is an important protein for the virus infectivity. The test was designed to detect all three immunoglobulins produced by the body to optimise the sensitivity and to increase detection at the earliest possible stage after exposure to the virus.

Professor Adam Cunningham, Professor of Functional Immunity at the University of Birmingham explains:  “Humans make three types of antibodies – Anti-IgM, IgG and IgA.  IgM tends to appear first, and IgG and lgA tend to appear later. By combining all three The Binding Site test is able to detect COVID-19 infection in people who have only recently been exposed, or who have mild symptoms.”

The CE-marked ELISA test is simple to use and provides up to 93 test results in 60-90 minutes. The collaboration has shown that as well as through saliva or venous blood samples, the test can also detect antibodies in a dried blood spot. This means that the test can be developed into a finger prick test for home use, offering a more accurate testing capability in homes, businesses, airports as well as GP surgeries and hospitals in the UK and worldwide including low and middle income countries.

Dr Stephen Harding, Chief Scientific Officer at The Binding Site said: “We set out to develop a test with the University of Birmingham that would detect COVID-19 early, and validated the test in a non-hospitalised population that had mild symptoms – which is the largest target population for COVID-19 testing – and designed the testing kit so it can be used by any laboratory in the world.”

The test was developed using over 800 blood samples taken from people who had mild to moderate disease.  The test is already being used in many of  the clinical studies conducted through the University including those focused on health care workers.

Charles de Rohan, CEO of The Binding Site, commented:  “The long-standing partnership with the University of Birmingham has brought together unrivalled academic, clinical and commercial expertise, and the combined team worked together seamlessly and quickly to deliver this unique and forward thinking test in record time.”

Professor Alex Richter, Professor of Clinical Immunology at the University of Birmingham, who led the test development team, commented:  “There are two things to get right in an antibody test – which antibodies are we looking for, and what are they recognising?  Testing for IgM, IgG and IgA antibodies to the spike protein should give an advantage in terms of early and accurate detection of people with recent exposure, who are not showing symptoms.”

The Binding Site has provided free kits to support work in developing countries where the disease continues to spread quickly and is impacting on children through Paediatric Multisystem Inflammatory Syndrome (PIMS).   The test has been submitted for rapid FDA approval and is expected to be available in quantities of over 2 million tests per month.