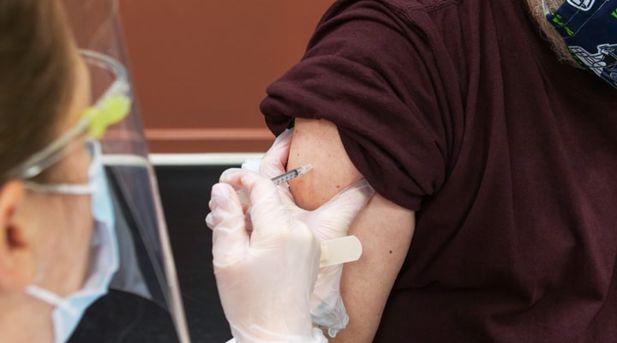 Six COVID-19 vaccines are safe and boost immunity for people who have had two doses of Pfizer/BioNTech or Oxford/AstraZeneca, show results from a UK-wide trial carried out in collaboration with BHP founder member the University of Birmingham.

The latest results from the world-first study COV-BOOST are published in The Lancet and have been key in shaping the UK booster programme, providing vital evidence for global vaccination efforts. The trial investigated the safety, side-effects of, and immune response to, seven vaccines when used as a third booster jab.

Trial participants received one of these boosters 10-12 weeks after their initial two-dose vaccination with either Oxford/AstraZeneca or Pfizer/BioNTech vaccines. A control group was given a meningitis vaccine to account for reactions not specific to the COVID-19 jabs.

The seven vaccines trialled were:

Of these, only the Oxford/AstraZeneca, Pfizer/BioNTech, Moderna and Janssen vaccines are currently licensed for use in the UK. Half-doses of Pfizer/BioNtech, Novavax and Valneva were also tested.

Professor Saul Faust, trial lead and Director of the NIHR Clinical Research Facility at UHS, said: “Our side effect data shows all seven vaccines are safe to use as a third dose, with acceptable levels of ‘reactogenicity’ – inflammatory side effects like injection site pain, muscle soreness, fatigue. All seven boosted levels of spike protein antibodies significantly after two doses of the Oxford/AstraZeneca vaccine. However, only six also did so after two doses of Pfizer/BioNTech, (Oxford/AstraZeneca, Pfizer/BioNTech, Moderna, Novavax, Janssen and CureVac). There were also large variations in response with different boosters. It’s really encouraging that a wide range of vaccines, using different technologies, show benefits as a booster dose to either of these vaccines. That gives confidence and flexibility in developing booster programmes here and globally, with other factors like supply chain and logistics also in play.”

Dr Christopher Green, Senior Clinical Lecturer at the University of Birmingham and Consultant Physician in Infectious Diseases at University Hospitals Birmingham NHS Foundation Trust, said: “We are immensely pleased to have played our part in how vaccine research can rapidly respond to the needs of the public during this pandemic. The members of the West Midlands public who took part in this trial, as well as the many other vaccine trials we have conducted, deserve a special thanks for joining and supporting our team of researchers, and these trials are so important as we hope to stay one step ahead of the virus.”

The study also looked at immune T-cell responses. T-cells are likely to be important in controlling disease severity, although their impact on overall protection or longevity of immunity is not yet known. COV-BOOST reported T-cell responses in several combinations of initial and booster vaccines, however these were not predictable based on spike protein antibody levels.

Reactions to all seven vaccines were similar, with fatigue, headache, and injection site pain most often reported. These were more commonly reported by those aged 30 to 69. 912 of the 2,878 participants experienced a total of 1,036 adverse events, only 24 of which were severe.

Prof Faust added: “It’s important to note two things about these results. First, they only relate to these vaccines as boosters to the two primary vaccinations, not how well they work as first and second doses. Secondly, the data describe the immune response at 28 days, not vaccine effectiveness. The relationship between that response and long-term protection is still poorly understood. We will be looking at the longer-term immune responses in COV-BOOST, conducting further tests at three months and one year after receiving boosters. We are also looking at whether a longer period between second and third doses improves response to the two of the booster vaccines. Several studies have shown this effect between first and second doses. We’ve done that by giving some of our original control participants the booster at a later point, and we expect those results to be available in the New Year.”

Professor Andrew Ustianowski, National Clinical Lead for the UK NIHR COVID Vaccine Research Programme, said: “Heading into the winter, and due to the emergence of the Omicron, the results from COV-BOOST are extremely timely and of national and international importance. Since the beginning of the pandemic NIHR and the NHS have been supported by the efforts and selflessness of study participants – helping us to identify the most effective vaccines and how they can be used flexibly to protect more people. We welcome the latest results from the study, and continue to support the COV-BOOST team with the further analysis of data which will help us understand the use of these vaccines as boosters long term.”

COV-BOOST was designed so that stored samples can be used in evaluating these vaccines’ effectiveness in neutralising any new variants of concern, and COV-BOOST samples have been made available to UKHSA for testing against omicron.